SUMMARY
Twelve years ago, a young girl is found murdered in a park. The police come up empty-handed, but their chief suspect is a long-shot — a door-to-door salesman Shinozuka (Jun Kunimura) with a history of assault. Unable to find firm evidence, they pin their case on experimental DNA tests which point to Shinozuka. At trial, he reluctantly confesses his guilt and is sentenced to life in prison. Suddenly, new DNA evidence comes to light, and Shinozuka is found innocent after spending over a decade in prison. How will he adjust to his new freedom and start a new life in the shadow of his past?

Attorney Yoko Ishihara (Hitomi Kuroki), tenacious and pragmatic, represents Shinozuka, pushing for the updated DNA test that proves Shinozuka’s innocence. She wants to make the police force and the media repay the debt of Shinozuka’s long years in prison, during which he suffered the death of his estranged wife and became separated from his only daughter. She’s out for revenge, and she’s smart enough to realize the high-profile case will further her own political ambitions.

Two men are key targets for payback. Journalist Seiji Kayama (Toru Nakamura) is guilt-ridden over his damming new magazine article that swayed public opinion and framed Shinozuka’s image as the probable killer. Detective Kunio Asada (Takanori Jinnai) is also thrown into turmoil, since he coerced the confession from Shinozuka. He swears to find the real killer and take full responsibility, but his superiors in the police force want him to take a back seat, hoping a quick public apology will clear the books.

Shinozuka isn’t curbed that easily, and neither are his former accusers. Kayama is the first to jump into action, begging Shinozuka on his knees to write the true story of the legal system’s horrible error. Asada gets down to what he knows best by interviewing Ishihara about the her motivations and her mysterious informant, Katsuragi, a known rogue and petty criminal.

Katsuragi says he knows the real killer’s identity, and he has the murder weapon to boot. But Ishihara refuses to pay him for the information, and Katsuragi disappears. As Asada and Kayama track down clues to the newly-opened mystery, Ishihara and Shinozuka get ready for a lawsuit that they hope will make history. 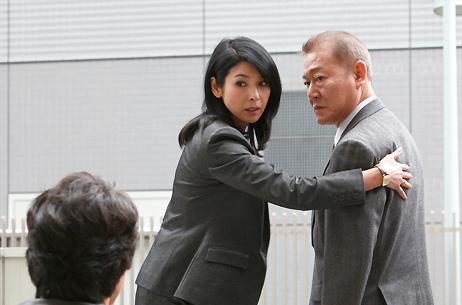 SLOW BURN, SLOW PAYOFF
When I started watching Suitei Yuuzai, the first episode left me quite uneasy. It’s hard to turn away from so many great actors, but the thought that this whodunit/guilt-party would stretch for the traditional 9-11 episodes made me question if I had the endurance. Blame it on years of Western dramas (or exceptional Japanese dramas like Hanzawa Naoki), but I’d already pushed my limits with Soredemo, Ikite Yuku, and I don’t have the patience for scene after scene of somber reflections and quiet conversations that find new ways to just say “It’s my fault. I’m guilty.” When I learned the story went for only 5 episodes, I dug in and stuck with it.

WHO’S THE BAD GUY? ONE GUESS.
Unfortunately, the villains in this drama — media-hungry politician Nobuyuki, street hustler Katsuragi, and the final “surprise” antagonist — are played so simplistically it’s hard to watch. Terajima Susumu as Katsuragi squints and smokes his way through the role, showing none of the savvy that would have kept him thriving in the criminal life for so many decades. Kazuyuki Aijima fares a bit better since his deliberately two-faced role allows for some variety. His zeal for political opportunity give the character some fun opportunities for humor, but we’ve seen this basic-level approach to politicians before. Demonstration of at least one sincere passion would have made him more interesting. Episode one, he’s amusing, but by episode three, it’s just dull and predictable. 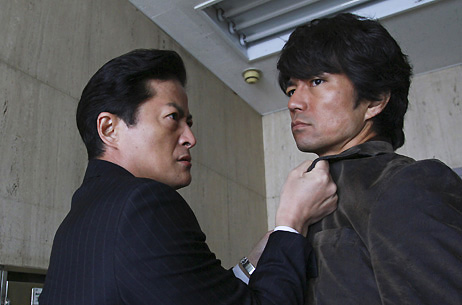 OKAY, EVERYONE’S THE BAD GUY
Five episodes in, it’s clear this is soapbox drama. The media is to blame for using victims to sell magazines. The legal system is bad for handing out ineffective punishments. Even hospitals have the nerve to charge victims of violent crimes for their care. Suitei Yuuzai spends so much time hammering these points home under thinly-veiled character monologues that the sudden shift to crime/political thriller in the final episode is jarring, though I was a bit relieved for some forward progress on the plot. 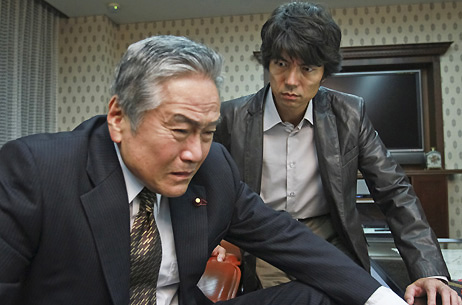 As I said, I stuck with it. Why? Even when the story itself was painful, the quality of actors and high-level production kept me hooked. Special praise goes out to an exceptional score and subtly effective production design and camera work. Suitei Yuuzai got a better team than it deserved.