Hanamizuki is not a typical young adult romance. Sure it begins with the shy straight-A student meeting the boy from the other side of the tracks by chance, but good girl Sae Hirasawa (Yui Aragaki) is the one who convinces Kouhei Kiuchi (Toma Ikuta) to take the keys from the back of a truck and help her get to her exams on time. While that idea ends poorly for both, it does mark the beginning of their relationship and a decade of joy, jealousy, missed opportunities, and personal growth.

Despite having an incredibly contrived plot that yanks Sae and Kouhei apart and then reunites them several times, Hanamizuki has a sense of realism. It knows that young love rarely lasts especially when long distances are put into the mixed. In defiance of its own theme of destined love, the movie shows Sae extremely happy with Junichi Kitami (Osamu Mukai), a senior photography she meets in college and ends up going to America with. Junichi is such a likeable guy that the end of his relationship with Sae is heart-breaking. Cynics may criticize him for being too perfect, but he’s an example that a person can fall in love more than once. 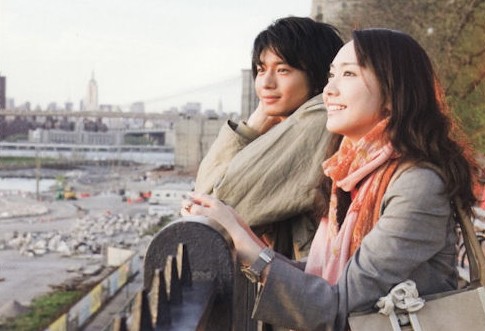 In contrast, Kouhei’s marriage to Ritsuko Watanabe (Misako Renbutsu) is a clichéd train wreck. He is obviously settling, and while Ritsuko is not depicted as a sympathetic character, it’s hard to not feel bad her lack of decent characterization. She has been relegated to the stereotypical role of jealous lover and a source of Kouhei’s dissatisfaction. The film overemphasizes the fact that Kouhei is trapped in his small-town working class life as a fisherman even though that is what he had dreamt of being.

Thankfully Toma Ikuta never become too mopey or mean. There are times when Kouhei deserves a good slap in the face (and he gets it via divorce papers), but Ikuta is able to make him loveable and someone who matures with each new life experience. The real star of the film, however, is Yui Aragaki. With Sae as her last high school-aged character, Hanamizuki reflects her own coming-of-age. As the adult Sae, she conveys a sense of composure and worldliness beyond her years.

Just like the song it is based on, Hanamizuki may be too sappy and sweet for some.  Nevertheless, it presents an earnest view of a relationship that spans the ten most tumultuous years of a person’s life. The ending leaves Kouhei and Sae’s relationship somewhat ambiguous, but an after-credit scene provides the bit of warmth that brings it together full circle.