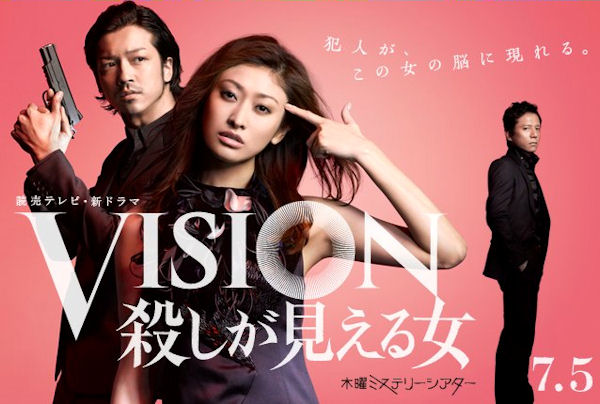 VISION ~ Koroshi ga Mieru Onna (“The Woman Who Can See Murder”) is much like its leading lady, Rena Kurusu: mysterious, sexy, alluring, and suffering from a major identity crisis.  Yu Yamada plays Rena, a model who discovers she can contact murderers before they commit their crimes in the name of Christina, someone they mistake her to be.  Entangled in the mystery is Kazuma Asano (Nobuaki Kaneko of RIZE), a cop on probation.  Kazuma is drawn to Rena, and as he uncovers the secrets surrounding her and the seductive Christina, the duo find themselves in more danger.

The drama does not know what kind of thriller it is: psychological, supernatural, or techno.  Although the ambiguity does add to the suspense, it makes the conclusion frustratingly confusing.  The inclusion of real science is unique (in fact, a subject of discussion among the characters was mentioned in a neuroscience lecture I attended a day after watching the episode), but it happens so late that it feels like an after-thought.  Not to mention it is overshadowed by the more far-fetched concepts.

Nevertheless, VISION’s appeal is in its character development.  Rena first seems bratty as she is uncooperative with both her manager (Masanobu Katsumura) and Kazuma, but as her ability manifests and her sanity is questioned, she breaks down.  Yu Yamada is able to portray varying degrees of vulnerability as Rena tries to become more than just a helpless bystander (and later, victim).  It’s hard to not want to protect her, and Kazuma is all too willing to be her white knight.  However, his nobility threatens to become an obsession that will destroy his career and sanity.  Nobuaki Kaneko, who has excellent chemistry with Yamada, mostly goes back and forth between over sad puppy face and overly angry.  While he does capture the darkness that lurks within Kazuma, he needs a few lessons in subtlety.

A surprise stand-out is Toshihiro Yashiba as Kazuma’s fellow detective, Yoshio Sakisaka.  He’s an intriguing balance of cold, hard logic and a fiery temper.  He tries to keep his distance and remain skeptical of Rena’s abilities, but when she become more of a key player in the crimes, he cannot deny something strange is going on– something he cannot explain with evidence and facts.  Sakisaka’s struggle with sticking to protocol while helping out his friend is a more interesting conflict than the one against the main villain at the end because it’s more real. 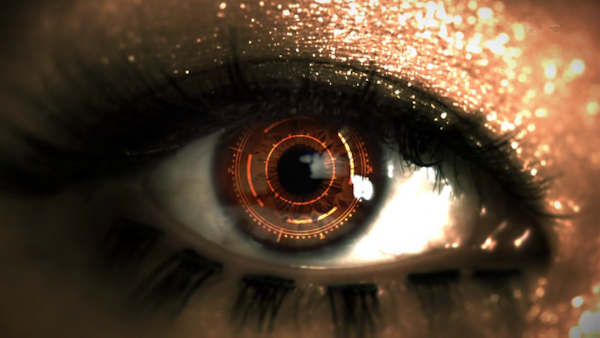 Overall, VISION is addicting but not satisfying.  The end is disappointment (except for the chilling last scene), but the journey to the answers is an entertainingly suspenseful ride.  It’s also easy to get wrapped up in the relationship between Rena and Kazuma.  Their romance definitely does not go down a traditional route so if you’re looking for something akin to American soap operas, this drama may be the way to go.  Just watch the first half and skip to the very end.

Episodes are available on Crunchyroll.